Over the past month or so, there has been considerable debate online about whether automation will destroy all jobs, and if so, how should policy makers try to respond. A few weeks ago, Bill Gates made headlines by proposing a ‘robot tax’, an idea which many economists roundly shot down. A story in February about Wendy’s installing 1000 self-ordering kiosks also made global headlines and was viral everywhere, as somehow being a harbinger for the imminent destruction of all jobs.

IMHO, the empirical evidence suggests this robot hysteria is overblown and that the ‘Luddite Fallacy’ will remain fallacious, but of course there is no guarantee that past economic trends will be predictive of future ones. Despite the trend towards increasing automation, the US labor force has grown in lockstep with working-age population size: 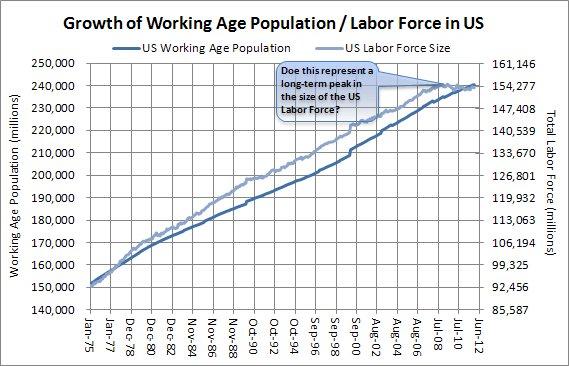 This says nothing about the quality or pay of such jobs, but it’s obvious the ‘end of jobs’ is far from certain.

So why hasn’t the post-labor utopian leisurely society that sci-fi movies and books promised us, happened yet? Why do these pesky jobs just refuse to go away? Here are some reasons why automation hasn’t eliminated all jobs, and why it likely won’t.

1. If an automation technology is successful at reducing costs, such technology will spawn an entire industry in and of itself, hence more jobs. The printing press led to eyeglasses industry, because so many people were reading books (which had become easy to produce, rather than having to be laboriously transcribed individually), that ‘farsightedness’ became a recognized medical condition. Until the advent of mass-produced printed literature, being farsighted was not really considered an aberration as it is today.

From The Economics Debate: Jobs and Automation:

What has to be understood is that when a new productivity-enhancing technology is successful, it spawns an industry, creating jobs in the process even if the original intent of the technology is to eliminate jobs. As more companies want this new technology to save money, the company that makes this technology is swamped with demand and needs to expand, and this means jobs are created. And then the new technology may occasionally break, and then repairmen need to be hired, ad infinitum.

Technology lowers production costs, which makes products cheaper for consumers. But technology also puts some people in the production process out of work. The ‘saving grace’ here is that lower prices increases demand for said product, which means that the manufacturer hires more people to keep up with demand , replacing employees lost to automation. This is shown by the price-demand curve below: The shape of the curve is determined by price elasticity, but generally, cheaper goods means more demand.

Furthermore, the company (Company B) that sells the raw goods to the first company (Company A) also sees increased demand (because Company A is seeing more demand due to lower prices), so Company B hires people, which counterbalances jobs lost from Company A. It’s not going to be the same jobs, but you can see how jobs lost from one company/industry can create jobs for anther company/industry. But what if Company A doesn’t lower prices? Then Company A will be more profitable and use the profits to possibly expand their business operations and thus hire more employees, anyway.

My ‘theory’ is that rather than technologies making old technologies completely disappear, both the old and new technologies coexist, but the new technology increases productivity so much that it dwarfs the older one, but demand for the older technology still stays strong for a very long time. So although the horse and buggy is an obsolete form of transportation, there will always be some need/demand for horses: for food, performance, sheriffs, racing, nostalgic stagecoaches, for fun, etc. Same for typewriters and quill pens..they haven’t gone away yet. Also, stagecoaches are still used in some circumstances. When food stores and fast food restaurants install self-checkout kiosks, rather than replacing all cashiers, there are still cashiers, but also attendants who help people with the kiosks.

4. New types of jobs are constantly being created.

Related to #1, innovations tend to create jobs. During the Middle Ages or Medieval Period, from the 5th to the 15th century, there were perhaps only as few as a couple hundred unique types of jobs, such as husbandry and farming. Nowadays, the number of types of jobs is probably in the hundreds of thousands. Jobs are being created that decades ago were inconceivable. The Web 2.0 boom, for example, spawned thousands of app and social media jobs that a decade ago didn’t exist. There are jobs were it would seem like jobs wouldn’t exists, but do.

For example, some websites, especially those that try to copy a magazine-style format, have those huge, annoying banners on the top of every article. Other websites have large images embedded within the article. Choosing those images is often no easy feat. Not only must the picture be relevant to the article and not draw too much attention to itself, but it has to be of a high enough resolution or else it will appear grainy or blurred when enlarged. Also, the image cannot be copyrighted, so scouring the internet for images its not an option unless such images are of the free domain. As you can see, there is a lot of work that goes into seemingly mundane tasks (such as choosing images to accompany an article), which means labor is required.

So what does the future hold? There will likely never be an ‘end of jobs’, but rather a decline of work and maybe fewer hours worked, meaning that a lot of able-bodied people will not work, either voluntarily or due to the job market becoming harder, and there will also continue to be a proliferation of low-paying service sector jobs. It’s also possible that individuals in the lowest strata of IQ may find themselves either relegated to jobs that pay subsistence wages, or unemployed and some some form of government assistance. Gig jobs, welfare, self-employment, disability, prolonged education, social security/retirement, and the ‘underground economy’ is replacing a significant chunk of the traditional job market.