In an earlier post, I argued that the outcome of the 2016 US presidential election would likely not lead to national upheaval, but I want to expand on it.

As the Great Depression showed, economic crisis does not necessarily lead to revolt. But historically speaking, revolt generally occurs during periods of extreme economic disruption and diminished well-being, typically as a consequence of war that indebts the nation. Second, it’s typically the wealthy, well-connected, and educated that foment revolution, not the poorest, which is kinda counterintuitive. But look at Donald Trump, who himself optimizes the ‘elite’, who rose to power by lending an ear to the concerns of millions of Americans when the other candidates seemed deaf. Che Guevara, Engels (who funded Marx), and Bin Laden – all had wealthy upbringings.

Revolution may also occur when the financial interest of elites are threatened, or if elites are able harness the frustrations of the proletariat to force a regime change. For example, there is evidence the American Revolution was the work of plantation elites:

According to von Borch, it was a colonial aristocratic elite espousing republican principles that articulated the revolt against England:

“Here we have what is, perhaps, the most deep-seated paradox in the emergence of America. The ‘Virginia dynasty’ of the first presidents of the independent federal State—Washington, Jefferson, Madison and Monroe—came from precisely this planter aristocracy. Within that aristocracy there developed the powers and the ideas which made the colonies independent of England and gave them a free, if conservative, domestic regime. The revolution against England was planned on the dignified estates on the banks of the Virginia streams….

Consider the Russian Revolution, lead by Lenin and the Bolsheviks, which overthrew the Tsarist autocracy (specificity Tsar Nicholas II., who was executed along with his family as a consequence of the revolution). Extreme poverty, worker strikes, and joblessness following the first world war, that had significantly weakened the Russian Empire, were aggravating factors:

The war also developed a weariness in the city, owing to a lack of food in response to the disruption of agriculture. Food scarcity had become a considerable problem in Russia, but the cause of this did not lie in any failure of the harvests, which had not been significantly altered during wartime. The indirect reason was that the government, in order to finance the war, had been printing millions of ruble notes, and by 1917 inflation had made prices increase up to four times what they had been in 1914. The peasantry were consequently faced with the higher cost of purchases, but made no corresponding gain in the sale of their own produce, since this was largely taken by the middlemen on whom they depended.

But Lenin himself was an elite, born to a wealthy family and had a law degree. Generally, history shows revolutions are led by elites who put their comfortable lifestyle on hold to advance a cause. Disaffected people will not mobilize without someone in charge behind the scenes giving orders. This makes a second revolution in America less likely, as someone has to first rise to the occasion to get the ball rolling and bankroll the actual revolution. For example, George Soros and other elites who funded BLM.

Regarding war, debt, poverty, and revolution, other historical examples include the French Revolution, in which major financial crisis and debt due to France’s costly involvements in the Seven Years’ War and the American Revolution, played a role. Same for the rise of Hitler, precipitated by Germany’s debt and weakened economy due to losing WW1.

However, although revolutions require a leader and considerable financial and organizational support, ‘lone wolf’ insurgencies don’t, and it’s possible there will be an upsurge in domestic terrorism should national sentiment decline substantially. As the 2002 Beltway sniper incident showed, which for nearly a month paralyzed much of the Maryland and D.C. regions with fear, the economic and psychological impact of terrorism are significant relative to the number of people and costs involved, which is why it’s effective and why governments expend so much resources trying to thwart terrorism. Same for the 1982 Chicago Tylenol poisonings, which attracted global media coverage and mass hysteria despite only seven deaths.

But, economically speaking, America is a long way from becoming like post-WW1 Russia. Around that time, 60-75% of the Russian population were illiterate peasants, so the conditions for revolution were a lot more ripe back then than now. Although US involvement in the Middle East has been costly, its nothing compared to the debt and hyperinflation that faced the Wiemar Republic.

Social media is like a portal to ‘Middle America’, and it’s not uncommon for middle class households to have multiple TVs, luxury brand automobiles, large SUVs, expensive iPhones with equally expensive phone plans, and designer clothes. Lifestyles were much more minimalist in earlier generations, mainly because people simply didn’t have the disposable income and credit to buy stuff. Since the mid 80’s, there has been an explosion in consumption as credit and nominal wages have surged, and technologies and free trade have make electronics and other tangibles cheaper and more accessible. 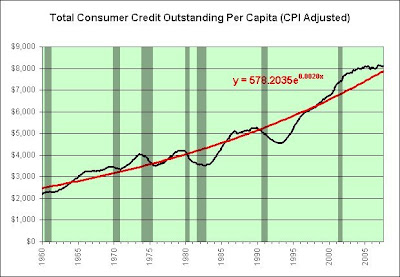 Inflation-adjusted consumer credit gained only slightly from 1965-1985 but began to surge afterwards and again in the mid 90’s.

The result is a higher standard of living – but perhaps at the cost of ‘community’, as explored by Robert Putnam in his influential 1995 essay Bowling Alone. As recently as a generation ago, entire families would gather to watch TV, because often they could only afford a single TV, to watch one of maybe a handful of shows that were available at the time. Nowadays, every family member has a personal computer and TV and can choose to watch one of thousands of shows by his or her own self, thanks to technologies like Netflix.

American society has been structured so that natural experience is minimized and in its place are mediated experiences that an expert or team of experts have crafted, edited, framed, and even written for the individual. The mixing of true experience versus mediated experience is discussed in detail in Jerry Mander’s book Four Arguments For The Elimination Of Television from the 1970s. This does not stop with television, but has morphed with the growth of the Internet. Television still reaches so many and has such power due to its physical effects.

That’s not to say there aren’t problems. Many millennials are struggling, the post-2008 recovery is uneven and hasn’t produced enough good-paying jobs, and millions of Americans have anxiety over job loss and or going broke if there is a medical emergency.

Although America seems (especially if you listen to the media) more divided than ever, such division has always existed. In the 60’s, it was division over segregation vs. integration. Perhaps the media is also playing role by focusing on the negatives and overlooking the positives, and this shapes people’s perceptions of the economy and society.

But the problem is, although Americans are far from starving to death, existential anxiety is a more intractable problem (you can’t just throw money at it and make it go away), and solutions are hard to come by. Material wealth and consumption doesn’t necessarily bring fulfillment or peace of mind. Maybe the answer is cheap and abundant entertainment. Maybe it’s religion. Maybe it’s promoting financial literacy so people will save for a rainy day and retirement (thus creating peace of mind) instead of frittering money on positional goods, although this may also hurt America’s consumption-based economy.