But this also applies to extent to post-2013 internet journalism, with the trend being towards more ‘showing’ and less ‘telling’. ‘Telling’, in the context of punditry and exposition, is to tell the reader what is on your mind, often in a brusque, impassioned, or long-winded manner, and it sometimes reads like a rant. For decades, until its abrupt end some time around 2013 for reasons that still remain largely a mystery, punditry and journalism, particularly online, was dominated by ‘telling’. For much of the 90’s and 2000’s, during the whole Clinton and Bush era, bloggers could make a good living writing emotive, hyperbole-laden ‘cons/libs are good/bad’ screeds, which were shared through email lists, blogs, and aggregators like Drudge, in the process generating significant traffic and advertising revenue for bloggers and aggregators alike. Of course, all that changed around 2013 and it became much harder up-and-coming bloggers, pundits, and writers to ‘make their monthly nut’ by linking the ‘left/right’ with the incarnation of Satan, as worked so well in the 90’s and 2000’s.

Between 2007-2009 on a different website, I blogged about the 2008 presidential election, but it was less about ‘coverage’ than me taking potshots at Obama at every opportunity, and it was a lot of fun. But much has changed since then – that was back when Twitter, Facebook, and YouTube were far smaller than they are today, and there were fewer political pundits. The major online media properties (Fox, CNN, WSJ, etc.) tended to have delayed opinion coverage (because they were late to the whole ‘blogging’ thing), allowing bloggers to one-up them, but these mega-sites have long since caught up. There is just so much content: Vox, WSJ, Bloomberg, etc., but the number of hours in a day, reading speed, and eyeballs haven’t grown to match the rate that content is being produced, so the result is a constant churn of content piled upon heaps of older content, and a lot of it ignored. This ties into post-2008 themes of winner-take-all, network-driven capitalism and how we’re in an age of abundance (content, ‘stuff’) but at the same time great scarcity (attention, differentiation).

But, again, the decline of opinionated punditry blogging (‘telling’) and the post-2013 rise of data-driven, nuanced style of online journalism, is also to blame for this decline, and as I will expound in a forthcoming post, most of the novelty that made blogging very successful in the 90’s and 2000’s has now worn off.

Although pundits can still do well with ‘telling’, it’s usually because they have already built a large, established audience/readership during the ‘telling’ days, that remain loyal. But in our era of ‘showing’, ‘telling’ techniques no longer work (or at least not nearly as well as they did years ago), and are perceived as ‘low information’ and intellectually lazy by a savvier readership and demographic that have grown tired and weary of charged partisan polemics and instead seek nuance, data, and intellectualism.

What is ‘showing’? Whereas ‘telling’ is to tell the reader what is on your mind, often in blunt terms, ‘showing’ is the use of data and empirical evidence to nudge, not force, the reader to your desired conclusion. Your opinions, beliefs are secondary to the evidence, not foremost. ‘Showing’ techniques include citing many references and links contextually and in footnotes, referring to historical evidence and case studies, data visualizations, as well as comparing and contrasting viewpoints, with the implication that your view is correct (or ‘less wrong’) but without explicitly saying so (showing).

Regarding contrast and brevity, the undisputed master of this technique was Jon Stewart of the Daily Show. For instructional purposes, if you can overlook his obvious political bias, he used this technique masterfully by showing on the screen, before the live audience, examples of the ‘right’ being hypocritical, by pasting quotes or juxtaposing images, and the audience ate it up without fail. He didn’t have to recite a 1000-word rant to convey his point, but just by the use of imagery and the inflection of his voice, was effective. This technique is employed heavily on Twitter, with Tweets of screenshots and highlighted passages of hypocrisy, not links to huge rants, going viral. Here is one example of viral image passed around the alt-right and NRx sphere of Twitter, about the difference between ‘order’ and ‘chaos’: 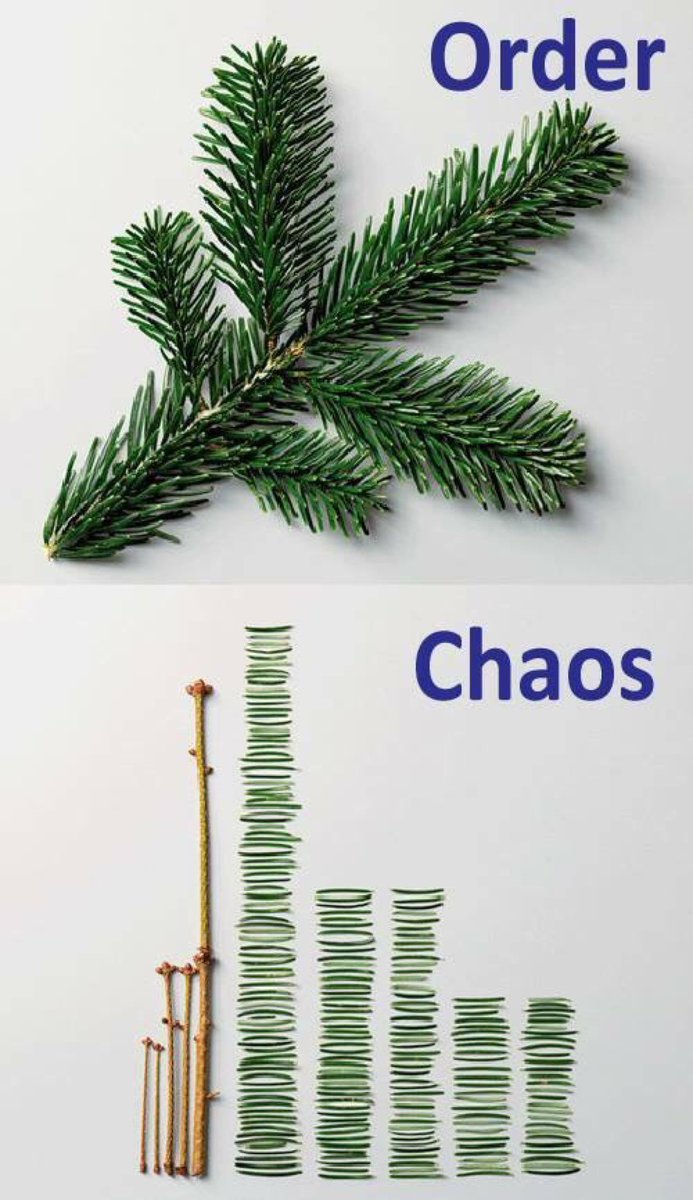 The aforementioned paragraph discusses brevity, but what about long-form, which is also hugely popular online? Isn’t that a contradiction? Not quite. In long-form, again, ‘showing’, not ‘telling’, is employed, but even more so. Showing in long-form involves, as mentioned above, data visualizations and lots and lots of links. Some examples of long-form sites that heavily employ ‘telling’ techniques to great success are Priceonomics, Ribbon Farm, Slate Star Codex, and Wait But Why.

A good example of ‘telling’ is a recent article by Social Matter Where Did It All Go Wrong. Note the extensive use of hyperlinking within the post, that instantly conveys authority and expertise in the eyes of readers. And not just links to Wikipedia, but many other sources, too. There’re are links to Moldbug, published studies, Amazon.com, etc. – all within a single paragraph. Even if you don’t agree with the underlying message, there is so much information that it’s impossible to not come away smarter having read the post, and because of these ‘showing’ techniques the post was successful and generated significant discussion in the comments and was shared extensively. Of course, it’s not going not be as popular as a Wait But Why article (and that’s an unfair comparison to make, as NRx is a very small niche, relatively speaking) but these techniques help immensely for all niches.

One problem with long-form is that it’s kinda pain in the ass, as it raises the standards for everyone, which is good because it means better content, but such content is very time consuming to produce. When Wait But Why wrote about cryonics, they didn’t just write an 800-word article about it – they wrote the most exhaustive article about cryonics ever. After I wrote my article about the simulation hypothesis, I realized that to get it to the standards of Wait Buy Why it would have to be 5,000-9,000 words and be filled with links and pictures, but I don’t think I would have been able to hold my interest long enough. After a certain point, you just want to move on to a new subject.

Also, having massive traffic, as Wait But Why obviously has, is in itself a great motivator to create longer content. Supply-side says that supply create demand, but demand also creates supply. If a boxing promoter cannot sell enough tickets (demand) to make it worthwhile, there is no fight (supply).