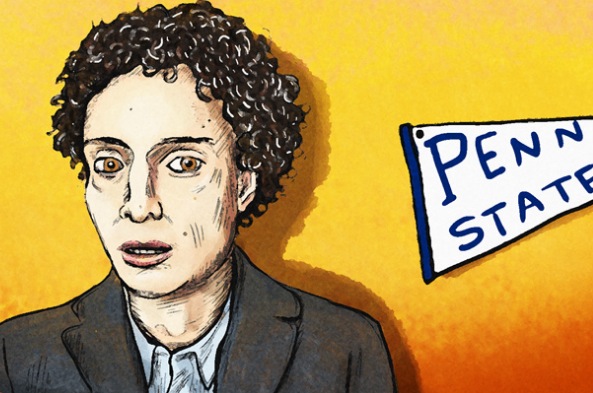 After a lucrative career as a public pseudo-intellectual spanning 15 long years – beginning in 2000 with his best-seller The Tipping Point and ending, in 2013, with the critically panned David and Goliath – the jig is up.

In 2013, in response to growing criticism, Gladwell quipped, ‘If my books appear oversimplified, then you shouldn’t read them.’

In other words, if you’re smart enough to challenge my assumptions, don’t read my books.

Apparently though, Gladwell’s assumptions, when challenged, dissolve like Alka Seltzer.

This has forced Gladwell, in order to save face, to issue ‘corrections’ and ‘amendments’ to the 10,000 hour ‘rule’, that, no, it’s not his fault for being wrong; instead, it’s our fault for misinterpreting him.

From Salon Malcolm Gladwell got us wrong: Our research was key to the 10,000-hour rule, but here’s what got oversimplified

This puts the ten-thousand-hour rule in a completely different light: The reason that you must put in ten thousand or more hours of practice to become one of the world’s best violinists or chess players or golfers is that the people you are being compared to or competing with have themselves put in ten thousand or more hours of practice. There is no point at which performance maxes out and additional practice does not lead to further improvement. So, yes, if you wish to become one of the best in the world in one of these highly competitive fields, you will need to put in thousands and thousands of hours of hard, focused work just to have a chance of equaling all of those others who have chosen to put in the same sort of work.

It didn’t read that way in Outliers where he implied, without preconditions, there is a linear relationship between practice and ability, eventually, after 10,000 or so hours of practice, culminating in ‘world class mastery’ of the likes of Bill Gates or The Beatles. When confronted, he had to offer a clarification clause that the rule only applied to those who already did 10,000 hours, but that thousands of more hours are needed. Suuure whatever you say, Gadwell.

It’s easy to forget that Gladwell is a journalist, albeit a very glorified one – not a scientist, although it’s easy to see how he is often confused as one. But the main problem is there is no actual proven science behind the 10,000 hour rule, which is based on the research of K. Anders Ericsson, a Swedish psychologist and Conradi Eminent Scholar, whose 1993 paper on ‘deliberate practice’ was cited over 6,000 times and was the inspiration for Gladwell’s Outliers, published in 2008, and Geoffrey Colvin’s Talent Is Overrated, also published in 2008. The 10,000 hour rule barely even qualifies as science, even without Gladwell’s treatment of it. It’s impossible to replicate the results in any sort of controlled setting. According to Wikipedia, Anders is credited for ‘…training a student to have a digit span of more than 100 digits. With Walter Kintsch he extended this theory into long-term memory to account for the superior working memory of expert performers and memory experts (Ericsson & Kintsch 1995).’ Wow a sample size of one. I wonder what the student’s IQ was…I’m pretty sure it was above 100, but we can’t let those pesky details get in the way of a nice narrative. After all, a message that gives hope to the dullards everywhere they too can covet the skills of geniuses with just enough practice, is an appealing one.

And addition to anecdotal evidence, flimsy science, sentimentalism, cherry picking (for Outliers: The Beatles and Bill Gates are frequently mentioned as evidence of the supposed efficacy of ‘deliberate practice’ – a sample size of TWO), the rest off Gladwell’s examples – chess champions and musicians – are suspect, too, as research shows:

The psychologists reanalyzed data from six previous studies of chess competitions (1,083 subjects in total) and eight studies of musicians (628 total) for correlations between practice and success, and found huge disparities in how much chess grandmasters and elite musicians had practiced. One chess player, for example, had taken 26 years to reach a level that another reached in a mere two years. Clearly, there’s more at work than just the sheer volume of hours practiced, the study (and a similar one by the same authors published in May) argues. “The evidence is quite clear that some people do reach an elite level of performance without copious practice, while other people fail to do so despite copious practice,” according to the researchers.

My own take is, there are certain tasks where the rule is more applicable, and others were it isn’t. I think music and athleticism involve flow states and muscle memory, whereas math and writing tend to be more cognitively demanding and involve precise structure and rules, and you either have the talent to do well or you don’t, and such talent tends to manifest at a very early age and without much apparent effort or practice, whereas it’s easier to take up painting, golf, or an instrument later in life. 10,000 hours is the amount of practice that allows an already talented person to possibly compete at the ‘world class’.

Here’s a passage from Every Love Story Is a Ghost Story: A Life of David Foster Wallace, that shows how talent often manifests early in life, can be readily identified by peers and teachers, and allows the recipients of such talent – because they are smarter and learn more efficiently – to make gains quicker than those who put in the same amount of hours but still struggle:

In the case of David Foster Wallace, he was talented enough to have an immediately successful literary career, publishing his fist book while in graduate school and getting no ‘pile of rejections’. Many people need a swift kick in the butt that they have no talent, that no amount of hours will suffice to attain mastery or commercial success, and should pursue more fruitful endeavors. Will such a message sell books or fill TED talk auditoriums? No, but it’s the reality.

Another example is Andy Weir, another genius as measured by IQ, who attained overnight literary fame with The Martian despite not even being a writer by trade. But because he is so smart, he was able to leapfrog ahead of aspiring writers who put in thousands of hours of practice to no avail. Luck? Maybe, but you’ll find that even the ‘lucky’ ones have a backstory, often some precocity (such as reading or talking early) suggestive of high IQ, that makes them standout.

Those are just two examples…without much effort I can think of many more. And that’s just for writing. Examples also exist for math and sports – of the attainment of ‘world class’ success and skill without tens of thousands of hours. High-IQ people people typically learn with fewer repetitions, thus necessitating fewer hours. And by ‘learn’ I don’t just mean repetition, but a heightened ability to make inferences from disparate pieces of data. In the case of writing, a high IQ often entails a richer vocabulary, a strong grasp of grammar, pacing, and sentence structure, and the ability to form a plot that captivates readers.

In fact, Gladwell, in a recent podcast, actually echoed a similar sentiment, that the ‘rule’ works for those who already have demonstrable potential and talent. But then why didn’t he write that in his book? It’s a rhetorical question. It appears his marketing strategy is a bait and switch of sorts: spoon-feed applesauce to his readers, who are paying money, and then when ‘called out’ by actual experts, recant and backpedal and hope that not too many people notice.