Central bank actions can encourage or accelerate economic activity, but they can’t create economic activity that otherwise wouldn’t occur. Much of what central banks do consists of making things happen today that otherwise would happen sometime in the future. It’s not clear that the effects are long-lasting or anything more than an acceleration of events within the confines of a zero-sum game. What is beneficial, however, as Professor Randall Kroszner of the Chicago Booth School of Business wrote me, is the fact that:

Some objectivists oppose current fed policy, arguing against all forms of intervention, although I don’t, arguing that FOMC policy, as well as TARP, helped capitalism and America’s best and brightest by stemming the bleeding from the weakest parts of the economy (housing, banking) so the healthier parts (web 2.0, retail, tech) could thrive. The S&P 500 is up 200% since March 2009 and the PE ratio is still only around 17, indicating that earnings have risen in lockstep with prices (not a bubble), and that the bailout was a success at restoring confidence even if no one liked it. From professor Randall Kroszner of the Chicago Booth School of Business:

[Central banks] can help to prevent a complete financial meltdown and the negative economy-wide externalities associated with a financial collapse. In these circumstances, and if done appropriately, their actions can do more than just move up future production to the present by helping to avoid economic activity losses due to a panic.

Central banking by itself cannot create growth, but it can create economic conditions that are conducive to growth, by preventing bank runs and keeping crisis brief.

Related: The System Worked: How the World Stopped Another Great Depression •

“Populism” has been a strongly rising element in politics over the last decade. It primarily means drawing class distinctions and claiming to be on the side of the common man. This often comes down to playing on the resentment of the lower-earning majority toward the wealthy minority. Populism is a particularly strong force in the U.S. presidential election now underway, fed by economic dissatisfaction among the working class due to the effects of globalization, job outsourcing, and technological progress with which some haven’t kept up. “Outsider” or non-establishment candidates in both parties – Donald Trump and Bernie Sanders – are having a lot of success telling voters the economy isn’t working for them and appealing to resentment toward those who are doing better. Now even Hillary Clinton is saying of the wealthy and powerful, “The deck is stacked in their favor . . . my job is to reshuffle the cards.”

From Brexit, to Trump, to Sanders, we’e seeing a revolt against the ‘status quo’, which is perceived as unfair and indifferent to the needs and the wants of the people, whether it’s immigration concerns for the ‘right’, or student loan debt and jobs for the ‘left’. Although the US economy is in pretty good shape – or at least relative to the rest of the world – average Americans are not fully participating in the wealth creation, or at least not as much as they were in the 90’s, when everyone seemed to be participating, not just the top 10% or so. The metaphor of cards being reshuffled is alluded to in the post In Search of Reset.

As the decline and death of entrepreneurship shows, the ‘pioneer spirit’ of America is gone. With the exception of maybe web 2.0 and some other niches, there just isn’t much opportunity in America, or anywhere, anymore. We’re kinda moving to pre-planned economy and society. Although biological determinism is one reason, another factor is saturation: the production rate of the amount of ‘stuff’ (mostly produced by large firms and entities with market dominance) to consume vastly exceeding the rate it can be consumed. A post-scarcity economy where everything is abundant and there are endless choices, may result in deflation. Also, in accordance to micro economic theory, firms in a perfectly competitive market may generate a profit in the short-run, but in the long-run profits will converge to zero. These deflationary forces help consumers, but it may hurt small entrepreneurs.

While not everyone would change their residence to reduce their taxes, some will. Remember that seven of the 50 states do not tax their residents’ incomes. Thus the bottom line on this – I think the good news in terms of fiscal responsibility – is that states have no choice but to think of taxpayers as mobile. If you raise the top tax rate by 10%, you won’t collect 10% more taxes from them. A surprisingly large number of the people Nancy and I meet in New York have their residences in Florida. That’s a reflection of economic reality – and should restrain the tendency to excessively tax the rich.

The U.S. is one of only a tiny number of countries whose citizens are taxed on all their worldwide income, regardless of where they live or where their income is earned. Thus, Americans don’t have a good way to escape federal income taxation by moving abroad. (Technically, they can leave the U.S. tax system by paying the taxes that would be due if they were to sell all their assets and realize all the appreciation to date. But they also have to surrender their citizenship and sacrifice frequent visits to the U.S., and the number of people willing to do all this is limited.)

This alludes to the Laffer Curve, the cornerstone of supply side economics, that the way to maximize government revenues is to not maximize taxes.

There are some parts of his analysis that are possibly wrong.

The good news is, it’s possible to have rising economic growth and less pollution:

Total CO2 emissions from fossil fuels and industry around the world grew just 0.6% in 2014. That was down from an average of 2.4% in the prior decade. Delegates to the current UN climate negotiations in Paris may tout this as evidence that economic growth can be uncoupled from increasing emissions, for gross world product last year increased by 2.5%. 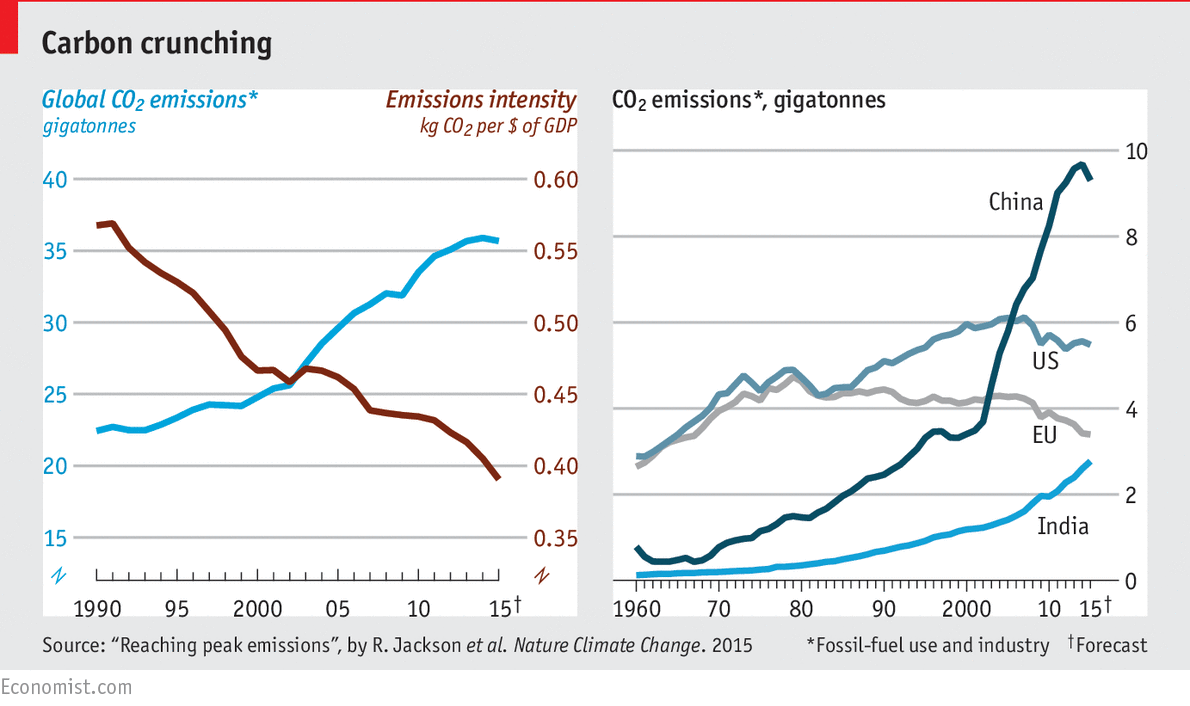 Quantitative easing, for example, consists of the Fed using newly printed dollars to buy outstanding debt; this should increase the amount of money in circulation and thus raise the dollar price of goods. Voilà: inflation.

Not quite. QE is not printing money, so an increase in the money supply is not expected. Indeed, the M2 rate of money has not deviated from it’s long-term exponential trend, despite multiple QE programs: As I explain, QE is an asset swap (the fed buying long-term bonds from banks and replacing them with ‘reserves’, which are NOT lent out), not money printing. The goal of the asset swap is to discourage saving by decreasing the yield on long-term government debt, after conventional fed policy on the short-term of the curve have already been tried. The fed can only directly influence the very short-term (federal funds rate) of the curve. With long-term rates low, the fed hopes this will discourage savings and encourage investment in riskier, higher-yielding assets. But due to the post-2014 ‘flight to safety’ attributable to weakness in Europe, China, and emerging markets, there is still insatiable demand for low-yielding US debt.

The U.S. government couldn’t figure out how to stop it in the 1970s, and the nations of the world can’t find a way to start it today.

Classically, inflation has resulted from (a) “demand pull” – too many buyers for a fixed supply of goods, or (b) “cost push” – rapid increases in the costs of production. Neither of these causes is in evidence today.

Neither of these causes is in evidence today. Thus inflation is quite feeble, and that’s disappointing to countries that would like to pay their debts with cheaper currency.

Countries like Turkey and Brazil that have high inflation are unable to easily inflate their debt away, so this is hardly a panacea. Japan, American and much of Europe have low inflation, due to the flight to safety.

There was a limit on the ability of U.S. automakers to sell cars burdened with substantial benefit costs while foreign car costs included much less for benefits. The bottom line is that, in a globalized world, if people in country A will work for less than those in country B, there are only four possibilities for manufacturers in country B:

Or ‘B” can branch out into new industries, such as information technology, healthcare, and intellectual property, which have boomed since the 80’s as US auto manufacturing declined. This does not answer the concern about the loss of manufacturing, but people need to accept that some jobs will go away and, for better or worse nothing can be done about it.

The rest of his essay is about trade-offs and how ‘good intentions’ can backfire: higher wages vs. fewer jobs; domestic manufacturing vs. higher prices; etc. The frustrating part about macro economics is that there is no consensus on these issues. Those on the ‘right’ cite studies of how raising the minimum wage will hurt job creation; those on the ‘left’ can cite opposing studies of how it can boot job creation.