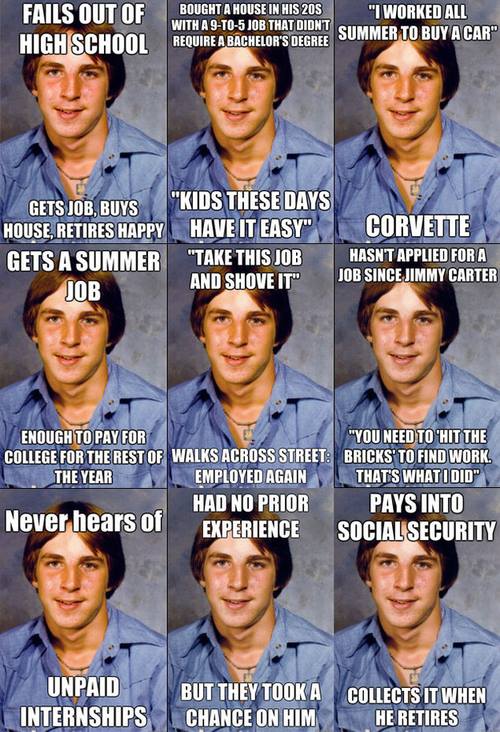 In addition to the post-2013 rise of nerd culture and the post-2013 decline of the SJW narrative, I’m also observing a post-2013 backlash by millennials against boomers, who are perceived as being blissful, naive spendthrifts who had five decades of post-ww2 prosperity dropped on their laps, who have the audacity to lecture millennials about getting a job, buying an over-sized home, starting a family, and spending money on useless crap as if it were still the 80’s. Millennials, probably more so than earlier generations, are acutely aware of things, whether it’s the economy or human biodiversity, so seeing these boomers with their social security and other benefits, stuck in la-la land in a pre-2000 mindset, is grating. Many millennials were mislead by boomers to major in useless subjects, and instead found themselves with poor job prospects and lots of debt for their efforts. They (the millennials) did everything they were told, and have nothing but debt and crushing disappointment to show for it. Of course, not all millennials are despondent – there are many successful millennials, but this generation does have a right to complain. Part of the problem is personal and avoidable, such as not majoring in low-paying subjects. Other factors are external, outside personal control, such as economy becoming more competitive, automated, and efficient, as well as the role of IQ, which is becoming more important. All else being equal, smart millennials have much better prospects in today’s competitive economy than less intelligent ones.

Millennials, as I mention in the mindset series (part 1 & 2), value independence, self-sufficiency, and authenticity. Part of the problem is not just liberal boomers (who are bad enough), but also conservative boomers who instill old fashioned values that may not longer be applicable or attainable to today’s generation – in today’s hyper-competitive, super-efficient economy. Getting married and starting a family is much harder when your job prospects suck, the rent and insurance keeps going up, you can’t get credit, and you have a lot of student loan debt. Many millennials would rather just go MGTOW or live with their parents to save money on rent, using the saved money to eventually buy a home and become self-sufficient than deal with the drama and expenses of family formation. Because of how cultural and societal values are changing, the GOP finds itself in a small quandary of crafting a message that is relevant and grounded in reality to the large millennial voting base, while not defecting too much from their ‘family values’ foundation.