From the NYT: The Death of the Party

This agrees with my ‘thesis’ that millennials are perhaps smarter and better informed than prior generations, which is why millennials are eschewing socializing for solitary intellectual endeavors such as watching Netflix, reading, STEM, debating economics online, or coding rather than partying.

This quote seems to epitomize the INTP/INTJ millennial mindset of introversion being better than extraversion: Then you have the hyper-competitive post-2008 economy that rewards intellectualism, ‘results’, and individuality over social skills and collectivism; for example, the decline of unions – which are inherently collectivist, diminishing employee benefits, increasing productivity, less job security, and the growing wage gap between the middle/lower and upper class: And you get worldwide internet sympathy and free stuff: When you’re smart, people actually care about you, your opinions, and your problems; but, when you’re not smart, you’re just another cog, another ‘eater’.

And you see evidence of the embrace of ‘millennial mindset’ in popular culture, with hugely successful TV shows and movies featuring socially awkward protagonists, as well as Reddit AMAs by scientists getting thousands of up-votes and positive comments.

Millennials aspire to be like Buffett, Zuckerberg, and Thiel – people who are better at creating technologies than relating to other people, and who became rich through brains rather than family connections or the ability to throw football really far.

Home prices in the Silicon Valley are up a mind-blowing 70-100% since 2011. Who’s getting rich? The smart people, including rich foreigners, who own homes, as well as private quality run by high-IQ people. Same for stocks, which are up 200% since 2009. Only 49% of Americans own stocks, and those who do tend to be better educated and richer – or, in other words, smarter.

Since 2008, the rules of the economy have changed, and millennials know this, which is why the stigma of living with your parents until your 30’s, not having a social life, being cash poor, or being unemployed is gone. Millennials understand the trade-off between short-term gains ( pissing away rent every month to a landlord to achieve ‘independence’, a lousy summer jobs that pays peanuts) and the creation of long-term wealth: skipping the useless Summer job and instead learning high-paying skills like STEM, or living with parents and using the saved money to buy a home, hence achieving real financial independence instead of the illusion of independence.

The unemployed physicist or computer scientist who is flooded with six-future job offers is, economically speaking, at a much greater advantage than the liberal arts dropout working at Starbucks, even though the later technically earns more money. The former has much greater earnings potential over the long-run, and thus is ‘richer’ despite being ‘cash poor’. Millennials understand that wealth is not about how much money you have right now, but about your future earnings potential, which in the case of the unemployed physicist, coder, or quant is very high. The key is delaying instant gratification for long-term value creation, a concept which millennials seem to grasp.

Maybe that’s why millennials are so obsessed with personal finance, STEM, and self-sufficiency, for example. Even ‘selfie’ culture is an example of the ‘self’ being more important than the ‘collective’. Same for the rise of MGTOW and ‘mens’s rights’, both which emphasize individualism against politically correct social norms. Millennials understand that the economy is and will continue to become more competitive and that you cannot rely on the ‘collective’ – be it the government, friends, or family – to pull you up – you have to forge your own destiny, your own wealth, and your own success. Or in the words of James Altucher, ‘choose yourself’.

The economy is forcing everyone to become ‘Objectivists‘, with economic reality showering cold water on the delusions all too many grew up believing from their friends, clergymen, family, and teachers – the delusion of a steady paycheck just for ‘showing up’, the delusion that social skills are more important than competence, and the delusion that we’re all special snowflakes when, in fact, biological reality means that some people are ‘better’ than others. 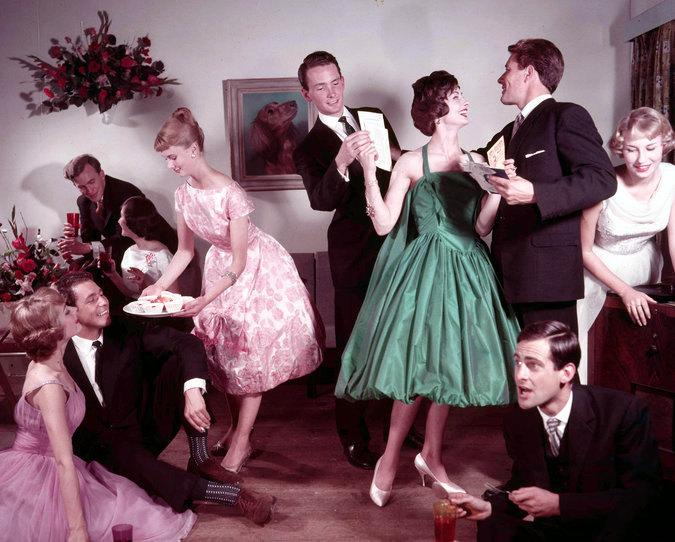 Could you imagine Ayn Rand at such a party? I think not. She, like many millennials, would probably be immersed in thought, or some form of solitude.