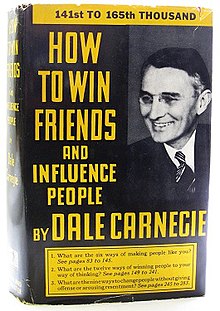 Erroneous beliefs tend to be infectious – think Malcom Gladwell and Daniel Kahneman books, the ‘10,000 hours rule’ and other old wives’ tales. Erroneous beliefs thrive because they tell us want we want to believe, what makes us feel good – not what is true, because the truth tends to exclude a lot of people, and when you feel excluded you feel bad. No, you cannot be a great mathematician or physicist if your IQ is not high enough, even if you practice a lot. Yeah, truth and biological reality hurts, but there’s no escaping it.

Another book that needs to be thrown onto the pyre of obsolescence is Dale Carnegie’s How to Win Friends and Influence People, a book that may have been relevant in the pre-internet, pre-QE age – but not anymore. From the Wikipedia summary:

-Become genuinely interested in other people.
-Smile.
-Remember that a person’s name is, to that person, the sweetest and most important sound in any language.
-Be a good listener. Encourage others to talk about themselves.
-Talk in terms of the other person’s interest.
-Make the other person feel important – and do it sincerely.

Generosity, courteousness, open-mindedness, building rapport, etc – these traits and behaviors seldom seem to win over people online, and I’m highly skeptical that they still work offline in the hyper-competitive, winner-take-all, results-orientated post-2008 economy. I see many, many exceptions, of people whose ‘shtick’ is being a jerk, and these people have throngs of fans. Hell, you see this offline in Hollywood and in corporate America, too, of conceited people getting all the accolades and wealth. Donald Trump, Bill Gates, and Steve Ballmer, to name a few, are notorious for being difficult and dismissive – quite the opposite of Carnegie’s advice – yet they are at the top of their game and respected highly.

So, if Dale Carnegie is wrong, how do you win friends and influence people?

It’s very simple (to explain, not to execute), and embodying this trait will almost certainly guarantee respect, influence, and friends:

You have to be extremely competent. If you are perceived as being very competent, you will win friends and influence people.

You see this over and over again. Bill Gates is very competent. Warren Buffet is competent. Elon Musk. Mark Zuckerberg. Edison, Tesla, Newton, Howard Hughes, and Steve Jobs are all revered for their competence in the form of intellectual accomplishments, not for being agreeable ‘team players’. The list goes on and on. Competence trumps all, and maybe authenticity helps a little, too. If you try too hard be nice you will be perceived as being a doormat or a pushover, and you will not only fail to win friends and influence people, but you may even be taken advantage of. But can’t you be nice and competent? Of course, but competence, again, is key. Or, maybe, Mr. Carnegie’s advice only works if you’re competent to begin with.

In the NRx sphere, for example, Scott and Jayman are critics of NRx, but they are highly respected by the NRx/alt-right community as authorities on internet subcultures and human biodiversity, respectively. Competence is enough to bridge ideological disagreements. If you’re perceived as being competent, people, especially other competent people, will listen and they will respect your views, knowing that you’re a worthy intellectual opponent who not only challenges their views but open new ones.

But being competent is hard…much harder than merely being a ‘people pleaser’. You you need a lot of knowledge, a deep understanding of things, experience, and probably a high-IQ, which for 95% of the population, by virtue of the Bell Curve, is unobtainable. You’re not going to sell a lot of books or get many speaking engagements selling a message that success is out of reach for the vast majority of people.