It’s never going to come to a point where there will be no jobs or no demand for jobs; just because a robot is created doesn’t mean it will reduce the net number of jobs, but what is will do is make some over the more overpaid and redundant jobs obsolete. This trend towards more automation will polarize jobs into a handful of categories: jobs in high-IQ fields (STEM, coding, economics, finance, physics, etc) that move with the economy and create cool technologies like the iPhones, Snapchat, etc; jobs involve speculation such as venture capitalism, stocks, and real estate; jobs in the high-paying service sector such as lawyers, IT, doctors and consultants; and finally, the losers who will lag behind the economy in the burgeoning low-paying service sector. The last group of jobs involves asking if you want fries with that or greeting strangers at Walmart.

All these kids going to school, being told they will go on to do great things – it just isn’t true, because according to the normal distribution of IQ scores, the majority just aren’t smart enough to be competitive in the post-2008 hyper-meritocracy. Or they take bad advice from the likes of James Altucher who recommends not buying a home, avoiding stocks, and starting a doomed-to-fail small business. In the not so distant future, the average-IQ masses will not be on the frontier of the economy, but in the services economy. Your pay will suck, and healthcare, tuition, internet, gas, and pretty much everything will keep rising relative to wages. It may not be rewarding financially or for your ego, but tough shit. You get to be a barista; you get to be a waiter; you get to be a Walmart door greeter. The economy doesn’t care about your emotions. Yes, the reality is that robots will destroy jobs (whatever hasn’t already been outsourced to China) and as this hollowing out of the middle becomes more pronounced, many people will fall between the cracks.

The greatest job growth in the post-2008 economy has been in the low-paying service sector: 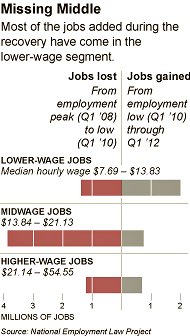 Average is really over as the job market bifurcates into high-paying smart jobs and low-paying service jobs.

The most common response by the left is that we need a guaranteed income. No, what we need is eugenics. For people of low IQs, welfare benefits should only payable contingent on drug testing and birth control. As part of a proposed ‘STEM bailout‘, those with verifiable high intelligence should be eligible for basic income because smarter people create more economic value than less intelligent individuals.

How about post-scarcity? A common argument is that automation will reduce costs so much that eventually everything will be free, humans will no longer have to work or compete for stuff, and living standards will soar. Fat chance. Yes, some aspects of living standards will go up, but just as there will be new jobs, there will be new ways of extracting money from people and creating scarcity. For example, an entry level personal computer used to cost $3,000, but no one ever paid for internet because the technology didn’t exist for the masses yet. Now you can get a computer for $300, but that internet bill ain’t cheap. Same for the software. The latest copies of Adobe and Office will still set you back hundreds of dollars or more. Peripherals, data backups, security software…all prices either flat or rising, despite huge gains in technology.

Our hyper-competitive post-2008 economy under a hyper-meritocracy is an unforgiving one that heaps instant, obscene wealth upon a few, but where a misstep can be fatal. Many are just a tweet away from being fired as employers, in a permanent cost cutting regime, are looking for any excuse to thin the overpaid masses. In an era where web 2.0 valuations and Bay Area real estate will keep going up for eternity; in an era where interest rates will never go up again; an era where IQ and being smart is more important than ever; an era where the state has joined forces with certain sectors of the private sector; in an era where personal failure is a permanent setback, now, more than any time in history, couldn’t be a better time to be smart, to be rich, to be an app programmer, to be a web 2.0 founder or VC, or to be a mathematician, biochemist, physicist, or economist.