A defining charcteristic of the post-2008 intellectual Renaissance is that America is stronger and more influential than ever. The left predicted in 2008, incorrectly, that the over-hyped financial problem would usher in a post-America era. The exact opposite happened. As evidenced by historically low treasury yields, an always rising stock market that has vastly outperformed its global peers, an effective federal reserve and congress, the indefatigable consumer, quarter after quarter of blowout profits & earnings for multinationals, low inflation, surging Bay Area real estate, tech companies and Ivy League institutions being inundated with foreign applicants, America and its institutions, more than ever, have become the center of the universe and the envy of the world all over. As much as the left wants a post-America era, it refuses to happen.

But many on the left insist America is dumbing down, especially compared to other nations, but the empirical evidence contradicts this.

If America is ‘dumbed-down’, then many other countries are even worse. In the global IQ ranking, America ranks pretty high (#18). Because of its high population and high-IQ, America has more intellectuals than any country. And this is with a sizable Hispanic and African American population, two groups that to tend to perform poorly on SAT and IQ tests. Canada and Norway, both predominately white countries, differ from America by only a single IQ point. There are two possible explanations: thanks to rigorous public schooling and the growing socioeconomic premium on high intelligence, American whites are smarter than whites anywhere else; or secondly, due to the growing population of high-scoring Asian Americans. However you choose to interpret it, this is promising for America’s future as an economic and intellectual superpower. 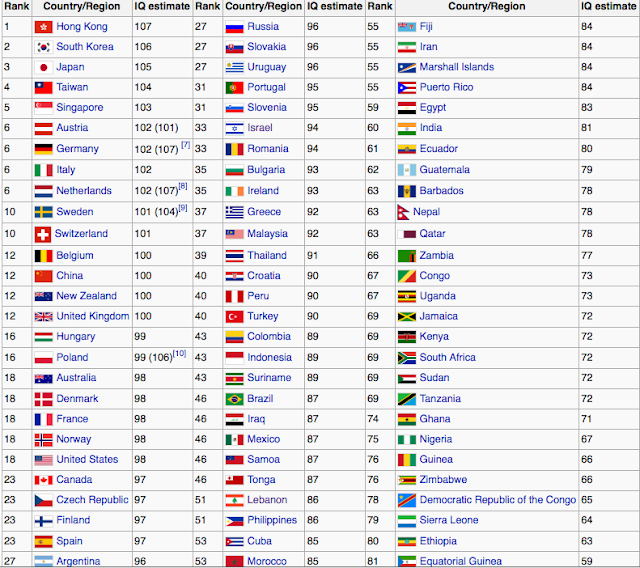 As more evidence America is one of the most intellectual nations in the world with the most rigorous public schooling, here’s a passage from an article in The Atlantic documenting a father’s struggle to do her 13-year-old daughter’s homework for a week:

I have found, at both schools, that whenever I bring up the homework issue with teachers or administrators, their response is that they are required by the state to cover a certain amount of material. There are standardized tests, and everyone—students, teachers, schools—is being evaluated on those tests.

It takes him 3-5 hours each night to complete the assignments. So much for America dumbing down, as much as the liberals wish for it to happen or fear it happening.

As we’ve covered in our earlier series of articles on the smartest generation, more testing and a more rigorous curriculum means smarter and better informed students that later in life are less inclined to default to liberalism.

From Josh Brown of The Reformed Broker Crowdsourced Terror, Hyper-Competition and the Acceleration of Acceleration

Market share matters more than money in an environment where the only thing that counts is the valuation at which you can sell stock. Stock seems to sell quicker based on total addressable market (TAM) and your size within that market these days. The town car landgrab is old school – something from a time before time. The tactics and savagery are a throwback but the motivation behind it is thoroughly modern, an artifact of now. Uber is worth $20 billion dollars and it’s nowhere near any kind of public offering. How can this be, the company was only founded in 2009? They’re in 200 cities across more than 40 countries. They claim the ability to offer a ride to 43 percent of Americans within 8 seconds. That’s how this can be. Overnight.

Agree. It’s amazing, but completely rational how Uber is such a valuable company. As we’re said before, in today’s hyper-meritocracy, anyone with a good idea and some coding can be a billionaire in a couple years. When people say capitalism is dead or American is in decline, I tell them about the overnight web 2.0 success stories or about the stock market, private equity and real estate. It’s not that capitalism is dead, you’re either not smart enough to participate or stuck in a rut. Stop blaming outside forces; blame yourself. People want to believe in things that confirm their biases while ignoring countervailing data. They want to believe the economy is weak because wages are not going up fast enough and too many people are out of work, that the market is rigged because of QE, or that they cannot conceive how America is doing so well when the doom and gloom media is blaring bad news 24-7.

The QE argument is refuted by the fact:

Small & medium size lending is well-off the pre-2008 highs. QE was intended to increase such activity, so QE is not overheating the economy as many feared it would. 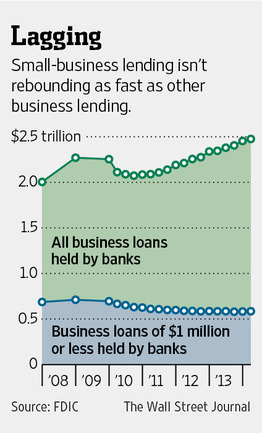 The fed is tapering and will likely finish the purchasing program by the end of 2014. Stocks have posted strong gains since May 2013, when tapering was first announced; treasuries are mostly unchanged.

The recent falling yields is due to trouble in Europe and the flight to safety trade, not the fed. Europe is having a QE effect on America.

A major reason why stocks are rising is because of improving economic fundamentals as measured by record profits & earnings, consumer spending, exports and consumer credit as well as stock buyback programs and mergers.

Uber will be worth up to $140 billion before the IPO. I’ll add, as we’re written before, the future of America is much like today but to the extreme. So whatever trend is existing now, such as rising healthcare, textbooks and tuition costs, will be amplified. Wealth inequality will keep widening. The wage premium on high-IQ and college degrees will keep increasing. The labor market will become more competitive. Web 2.0 valuations, along with Bay Area real estate and treasuries, will keep going up. Stocks will keep rising with no bear market. We’re in a greater-moderation of no downturns and monotonically increasing growth, which will continue for what will seem like forever. Policy makers have conquered the business cycle; they have conquered the rate hike; and they have conquered the bear market. Next comes the type 1 civilization transition, the singularity, a theory of everything, mind uploading, a halo ring that will encircle the earth, space colonies, a matrix, and much more. But back the present, don’t get your hopes up, liberals, that there will be some sort of 2008-like crisis to reset the new world order to a more egalitarian state. Not going to happen.

Predicting foreign matters is harder. Just assume if things get out of hand in the Middle East there will be boots on the ground, especially under Clinton or, hopefully, if the republicans can control all three branches of government with a super-majority. The later would be the best for the economy and national security, and Wall Street would rejoice under such circumstances, sending stocks much higher.

In the post-2008 world, there hasn’t been a better time in history to be smart and or rich. Whether it’s in stocks, real estate, web 2.0, finance, and coding, smart people are making all the gains in this protracted economic and wealth creation boom. This trend will continue for decades to come, of smart people rising to the top and less intelligent people being pushed to the margins.

A dissenting view from iSteve:

Chinese students also seem rather adept at cheating. Boo hoo hoo the Chinese are stigmatized. We don’t need more multiculturalism or HBD nerdery that supposes ethnicity and background are meaningless as long as the group in question is well-represented at LAN parties and anime conventions.

This is an example of favoritism and no different than liberals using quotas against whites except it’s quotas against well-qualified foreigners. Part of HBD, in contrast to politics, is about celebrating innate talent, exceptionalism and skill of the individual in contrast to the forces of collective leveling.

To quote Mortimer Zuckerman of U.S. News and World Report (emphasis mine), “God is not necessarily an American. National success in the international marketplace today turns more and more on human creative power, highly educated and motivated workers, organizational talent and capital investment – and these we have been neglecting.”

In the context of post-2008 American exceptionalism and pro-growth policy, the lesson of the 2008 financial problem is we need to have systems in place to stem crisis as soon as it arises instead of letting key institutions fail, and secondly, let’s stop instigating class warfare against bankers, traders and other economically valuable people. These financial instruments, while hard to understand and occasionally prone to blowing up, are important in ways that are hard to describe, but take my word on it. It’s like what Steven Pinker would say: the left would rather have society regress than risk creative destruction. Let’s stop attacking the wealth creators and instead find ways to control entitlement spending. In the events leading up to the financial problem of 2008, mistakes were made and things got out of control, but mistakes and bad luck are not fraud, which is the crux of Megan McArdle’s argument and others. In attacking the bailouts and crony capitalism, the libs think they are defending the tax payer, but many tax payers such as myself supported the bank bailouts because they created economic value. Second, income taxes went up in 2013 due to Obama’s inability to compromise, not out of economic necessity.

From web 2.0, Tesla, and Uber to breakthroughs in physics – all in just the past few years – we’re witnessing a flourishing of knowledge and wealth creation like never seen before. As a rational optimist, there’s a lot to be optimistic about.