Theodore Dalrymple of Taki Magazine wrote an interesting article about investing. A passage that stood out:

In this life I entrust my savings, such as they are, to advisers, in the hope that they are not of the Bernie Madoff school of finance and investment; but for all I know, or can be bothered to find out, they may be.

I suppose the only way to eliminate that risk is to manage it yourself. It’s pretty easy to do. Also, after taking into account the fees, it’s unlikely the manager can beat the S&P 500, but I also don’t know what your financial objective is, either. However, pretty much any investment strategy- from conservative to aggressive – can be replicated with a retail brokerage account using stocks, options, futures, and ETFs. The advantage is no one will run off with your money and much less fees. For example, the founder of the Grey Enlightenment makes roughly 50% a year selling volatility hedged with Russell 2000 puts and does it all from a retail brokerage account.

For the foreseeable future, the market will keep going relentlessly higher, with only brief pauses along the way. With the exception of moral decay, we’re living the greatest of times, at least as measured by wealth creation and prosperity, even if relatively few can participate in the gains.

If you haven’t already seen it, this tedx talk on the validity of standardized tests should restore your faith in the markets and America. The market keeps going up because of the economic value created by smart people and to reward the smart people for the value they create. Economic policy is designed to make the successful more so, to advance technology, as well as America’s global economic hegemony. Do you really want to bet against the high-test-scoring geniuses and the policy makers that are subservient to them? Or bet against the U.S. consumer? I sure as hell don’t. Those who did in 2009 lost their shirt, as I recall.

Judging by some of the comments in the Taki article, it seems many don’t have much faith in the financial services sector. Not much different than NYT or Huffingtonpost ‘they are all crooks’ or ‘the market is rigged’ type comments. When people say the markets cannot be predicted, that long-term superior returns are not possible, or that prognosticators are useless, I say ‘bullshit’. To be dismiss all forecasting as voodoo is just the lazy, anti-intellectual approach that appeals to the likes of Taleb or Gladwell, who assume investors are irrational and cannot beat the market. In the same way ‘blank slate’ liberals deny individual biological exceptionalism or America’s exceptionalism, they deny that exceptional investors can exist, or that some people can consistently beat the market on skill, not luck. The left attributes exceptional returns to insider trading, crony capitalism, some unfair environmental advantage, or just plain luck – never innate skill. There are many instances of funds that have beaten the market over the long run – two notable examples being the Soros Quantum Fund and the Renaissance Technologies Medallion Fund. There are many people who trade options and post consistent gains. On stocktwits there two people I follow that have made a killing trading options in the various high-growth stocks like Tesla and Priceline, and they keep doing it over and over. Just like some people have an innate, biological knack for math and science, some people are better able to read and time the markets.

Some things are easier to predict than others. For example, predicting the direction of the market is not that hard. Plot the past 50 years of the S&P 500. It mostly goes up, with some hiccups along the way. 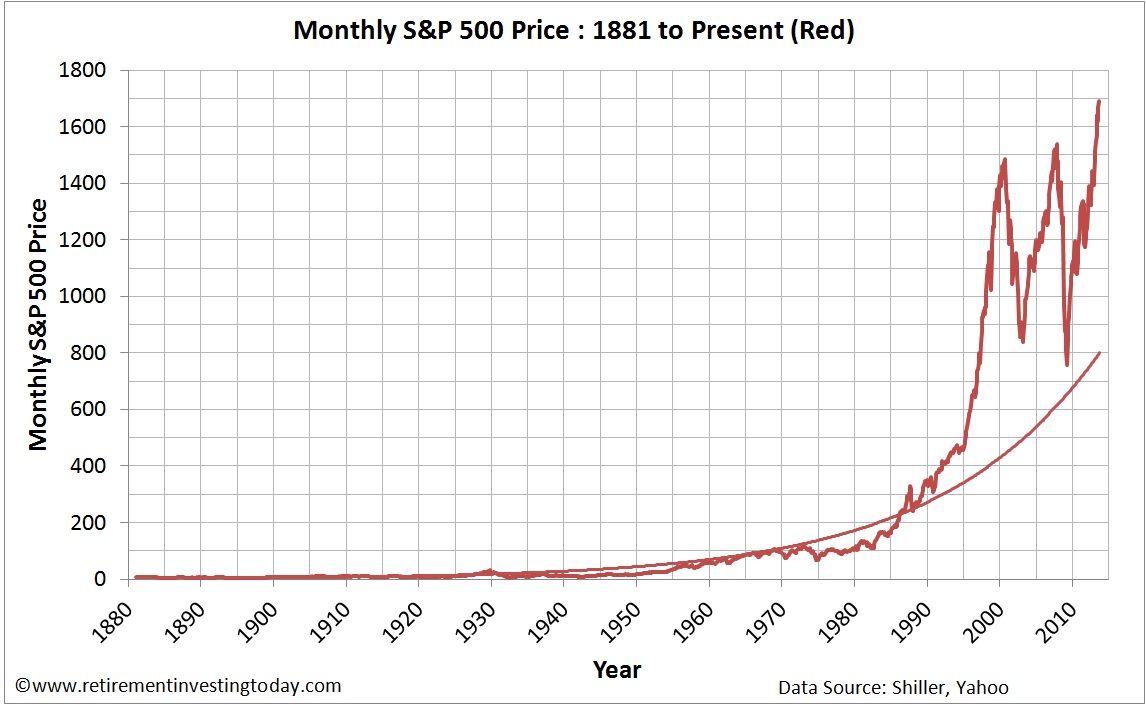 It’s generally accepted stocks tend to rise on fundamentals, and since the U.S. has better fundamentals than emerging markets, then we can infer that buying U.S. equities would be a better bet than buying foreign equities. It’s like putting your money on the horse that always wins. The ROI, obviously, will not be as great as the underdog, but the risk-adjusted odds of simply making money are better.

Furthermore, a lot of investors make the process needlessly complicated by taking on too much idiosyncratic risk. They want to beat the market, so they speculate in small cap stuff that has high beta. The problem is, these small companies carry idiosyncratic risk (company risk) that can result in major under-performance, even in a bull market. If you’re gonna buy individual stocks, buy companies that have impassable moats, scant competition, huge growth, and very large market caps – my favorite stocks that meet this criteria are Google and Facebook. If you want greater returns, use some leverage in the S&P 500, because you are still following the market and there is no idiosyncratic risk.

Another common theme in the comments as well on other sites such as Captain Capitalism is that the U.S. economy is in a monetary bubble that is on the verge of collapse. The system won’t explode because it’s blessed by the smartest minds in the world. Also, America is a safe haven, so if things start to get rocky, money will inflow into treasuries, which eliminates the fear of hyperinflation so many fear. Ironically, the fear of hyperinflation will be deflationary, although this only works for large economies with reserve currency status such as Japan and the U.S. There really is no crisis since the treasury can roll over its maturing debt indefinitely. As shown below, the good news is interest payments as a percentage of GDP is very low:

More GDP growth would make it worse because it would increase borrowing costs, due to rising rates. It’s better to have cheap money to fuel M&A and buybacks than too much employment and economic growth.

Also, the U.S. dollar has outperformed most currencies since 2009 and, over the past 100 years, is one of the few currencies to not be completely destroyed by hyperinflation. The dollar technically may have ‘lost’ 90% of its value since the 1900’s, but a dollar has much more utility as well. Realfactbias.blogspot.com does a good job debunking this myth:

All of south America, most of the Middle East, Africa, Russia – all have political instability and or lots of inflation. Turkey had to cancel its old currency in 2005 because its Lira become toilet paper. Another example, Russia, like many developing economies, has a long history of hyperinflation and political upheaval, which creates a lot of risk, that in my opinion, even a very low PE ratio is insufficient to overcome. In 2008, Argentina nationalized savings accounts. Now they are defaulting again. Last year, Cyprus gave bank depositors a 10% haircut. The Venezuelan Bolívar is in the toilet, having lost some 97% of its value relative to the U.S. dollar: Predicting bubbles has become the new pastime of the commentariat. Liberals said the Facebook IPO was for suckers at $38, now, just 2 years later, the stock is at $68. So much for that ‘obvious’ bubble. How about twitter, which they said was a bubble in 2008 and now is worth over $25 billion. Same for Snapchat, Uber, Instragram, and many more. Even if the valuations are overextended, they have risen so much since being labeled a bubble, the term has no predictive value and, for all intent and purpose, is meaningless. It’s become the reflexive explanation for any asset that is rapidly rising.

It’s the reactions to the perceived bubble that has political connotations. To free market capitalists such as myself and others, a rapid rise in asset prices is a function some sort of supply and demand and should be let alone. The left, on the other hand, sees it as unsustainable and wants to take preemptive action to stop it, so that people don’t get ‘burned’. From years of observation, I’ve noticed a tendency among leftist types to call everything either a bubble or a crisis, and to dismiss the people who invest in these appreciating assets as ‘irrational’. The perfect investment for liberals is collecting pennies in water jugs because, after 100 years, you still have the name amount of money, precluding the possibility of any bubbles or irrationality. It’s rumored the liberals have so many pennies stockpiled – dating as far back as the 1800’s – that if they were all spent today, the fed would have to raise rates tomorrow. Liberal babyboomers will bequeath trillions of pennies to their children, possibly spurning the greatest economic boom, the likes of which have never been seen before.