In a major reversal, Lion endorses Biden. Although Lion had long criticized Trump’s response to Covid, I was not expecting him to defect to Biden (and as some individuals in the comments note, a vote for Biden may effectively be a vote for his VP, who is way worse than Biden). In 2016-2018, Lion was one of the the most ardent pro-Trump bloggers out there. Like Trump, Lion is from New York and he probably felt some sort of commonality with Trump, such as a mutual dislike of Bill De Blasio. Lion thought Trump was finally someone who, like a political version of Tom Wolfe, could bridge his cultural connections with his political connections, and in the process expose the underbelly of the corruption of both. There is a certain urban and cosmopolitanism hipness to Trump that like-minded urban conservatives such as Lion can appreciate, in contrast to how pop and urban culture are framed as exclusively of the left.

Lion is not the only one to turn. A trend I have observed is that some of Trump’s biggest supporters turned out to be some of his biggest and most vocal defectors, two examples being Ann Coulter and Richard Spencer. Ann and Richard were huge Trump supporters in 2016. Ann had a falling out in mid-2017 after the realization that the wall was not going to be built, and her constantly needling and her scathing columns attacking Trump finally drove him to un-follow and disavow her, which in hindsight in regard to the wall she was correct. Spencer held out longer, but Trump’s purportedly lackluster response to Covid, was too much. On the night of Trump’s victory, Spencer was photographed giving an ‘OK gesture’ in front of a Trump hotel: 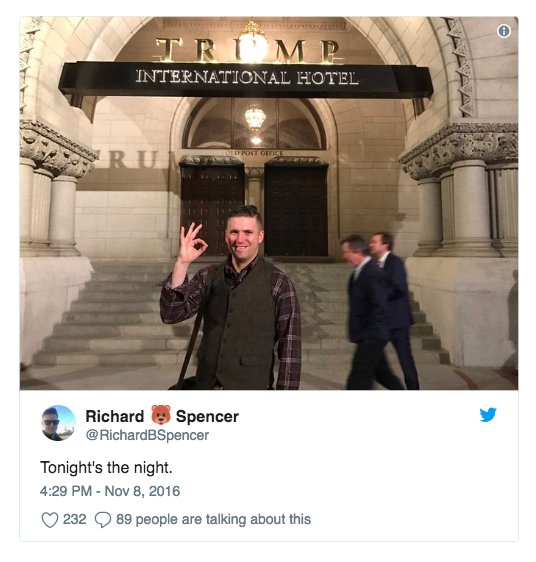 So much for that.

The post went viral and generated over 200 comments. Predictably, given Lion’s pro-Trump readership, there was some disagreement, but it was mostly respectful. Trump supporters do not care whether or not you support Trump. They however dislike phoniness. Lion’s endorsement of Biden, although possibly wrong, was at least sincere and well-intentioned, and I think many Trump supporters can respect that. Living in New York, Lion first-hand witnessed the devastation of Covid, both in terms of the local economy and deaths, so he had actual skin the game.

As for myself, I never thought Trump was a ‘great president’ or a ‘God Emperor’ as some had envisaged him–just good enough to get the job done, that being the President of The United States without everything going to shit, which is what the media in 2015-2016 predicted would happen if he won. Instead, the US economy and stock market has posted some of the largest gains ever, even in spite of Covid, And save for some unrest due to BLM, the US has been remarkably stable domestically. And in terms of geopolitics, things have also been stable. The so-called ‘trade war’ with China was more of a media-generated war than any sort of threat to the economy. The much-hyped Trump tariffs did not cause mass unemployment or high inflation, as so many economists wrongly predicted. There was no war with North Korea. As much as the liberal media wants to believe that Trump ‘disgraced America,’ alliances between major US allies such as Germany, France, the United Kingdom, Canada, and Japan remain strong.

My expectations going in 2017 were low, and even even that proved too optimistic. I knew there would be no wall, let alone Mexico paying for any of it (how much has been built is debatable, but a recent source puts the grant total at 5 miles of new wall). Even I was hoping for more. Maybe some legislation to do something about the flood of illegals, but nope. But I did not feel betrayed, because my expectations were already rock-bottom to begin with, knowing that U.S. presidents, particularly Republicans, have very little control or even willingness to change domestic policy, save for times of crisis (such as 911 or the 2008 financial crisis, although not necessarily for Covid, as I will discuss in a later post) and that gridlock and an unwillingness of House Republicans to work with Trump would all but guarantee minimal legislation, save for tax cuts, which were a shoo-in. Trump pursued the tax cuts immediately after entering office, for an easy legislative win and to boost the economy. People like Coulter and Spencer who wanted a wall would have to wait. Its like, “Yup….Trump did what I expected him to do, which is to say, he did very little.” Anyone who thought Trump would enact, or even attempt, anything even tangentially resembling a pro-White or White-nationalist agenda, were deluding themselves. It became evident every early on, at least to me, that we were not going to get a repudiation of ‘politics as usual,’ but more of the same, but with Trump’s unique flavor of rhetoric and delivery, which to some is an acquired taste. And to others annoying.

I remained long stocks, knowing that the market would boom under Trump’s policy of low taxes and low interest rates, which even in spite of Covid the stock market has done very well under Trump ,especially tech stocks. It is not I am that smart at politics (I get details and facts wrong a lot, admittedly), but I get the ‘general trend’ or the ‘big picture’ correct, which matters more from an investing standpoint. If you know the endpoints in advance, then you don’t need to know the stuff that is going on in-between. When in 2019 Trump threatened antitrust against Google and in 2018 threatened Amazon, I knew it was just smoke. I did not flinch and sell.

You do not have to be as savvy as someone like Nate Silver to know that the private sector, especially the tech sector, has a lot of autonomy from the public sector, or that Trump could not possibly enact even a fraction of the stuff he had promised in 2015-2016. The Republican Party has never been about drastic reform, but about maintaining law and order and stability, and ensuring individual property rights. It does not matter to the GOP if the country is being swamped with immigrants or that its culture is being debased, but only that America’s decline is a controlled one. ‘Reform and change’ has always been exclusively the domain of the left, but the bipartisan desire for reform and a departure from politics as usual can explain the popularity of Trump during the primaries, and in 1992 the unexpected rise of Ross Perot.

In part two of this series, I will discuss and refute some of lion’s criticisms in more detail.