If it’s not already obvious enough that Nassim Taleb is a liberal, he re-tweeted this: 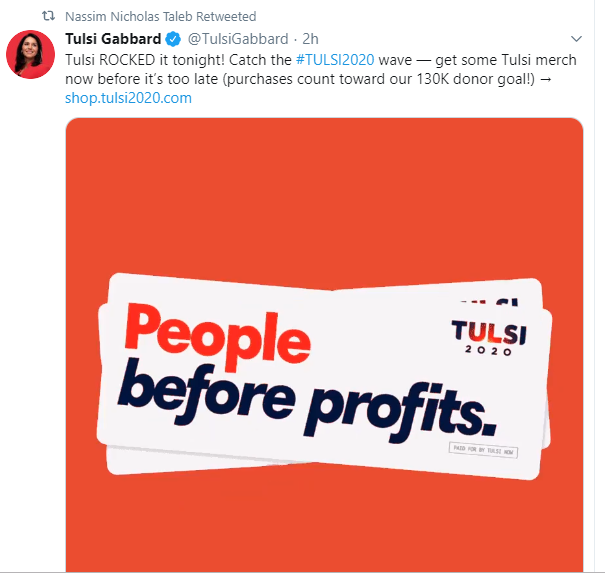 One can argue that a retweet is not an endorsement, but if that were true, Taleb would have added commentary.

I guess we know who he’s voting for. It also shows that Tooleb never supported Trump either in 2015-2017, but only pretended to in order to help grow his following. His actions reveal his true beliefs.

It’s also possible that he re-tweeted it because Gabbi scored some points against Kamala during the recent debate, but I don’t fully understand the logic of pro-Trump people who are praising Gabs, because if you want Trump to win, then you should want the least electable, most anti-white candidate to win the nomination. Thus, we should be rooting for someone like Harris or Warren.

Even as far back as 2011, before I started this blog and when Taleb was still endeared to the libertarian-right, upon reading his books, forecasts, and articles, I suspected he was a liberal, because the overarching theme of his philosophy, that being epistemological limitations of man and science and his overuse of heuristics and his disregard for social hierarchies, struck me as left-wing even though at the time I didn’t know much about philosophy or had a word for it. That is why Taleb references Popper and falsifiability so much. I define liberalism to also mean “the willful denial of objective reality; the denial of absolutes and hierarchies; the conflation of the objective with the subjective, of being of equal importance and significance” Same for his overly punitive take on Wall St. and bailouts, which Sanders or Warren would agree with. It just seemed like a view that a liberal-minded person would profess even if such a person does not outwardly appear left-wing.