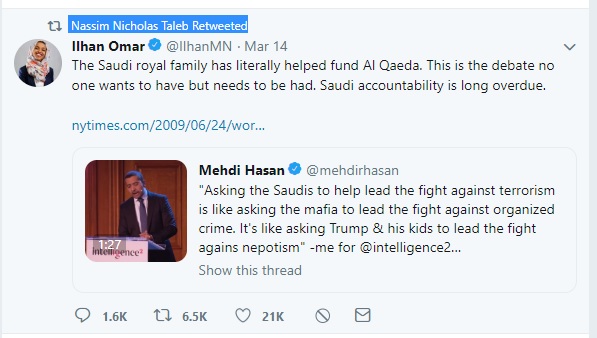 Even if she is right, it’s evident Taleb prefers the company of the far-left than the right, by following and re-tweeting leftists.

It’s funny how Vox thinks Taleb is to the right of Dr. Peterson even though despite both being highly visible public figures, the left never lifts a finger on Taleb, yet the left hates Peterson with a passion that is perhaps only rivaled by their hatred of Trump. Even liberals such as Sam Harris and Steven Pinker are targeted by SJW-left much more so than Taleb, suggesting that Taleb is a bigger liberal than those two. Why would the left waste so much time attacking someone, unless that person is actually a threat? The left leaves Taleb alone because they know that Taleb is on their side on issues such as IQ, gender roles, gender pronouns, gender being a social construct, Saudi Arabia, Trump, etc.

Taleb is a covert leftist whose ‘tough guy’ persona is designed fool people into thinking he’s not your stereotypical liberal effeminate male, while occasionally dropping left-wing talking points on topics such as Trump, Islam, or IQ in order to slowly indoctrinate his followers into subconsciously holding left-wing views but without explicitly acknowledging them as such. It’s very effective marketing, because you don’t even know you’re being marketed to, and having the spokesperson of your ideology not look like the Obamacare pajama boy but rather like Sean Connery or Jason Statham, is a major plus. But just as Taleb exudes masculinity, Dr. Peterson, with his professorial attire, nuanced mannerisms, and advanced degrees conveys much needed intellectual credibly for the ‘right’ in a medium that is otherwise dominated by leftist intellectuals, which is why he’s so effective and why those same intellectuals target him. Dr. Peterson, but also the IDW in general, is encroaching on their territory.

Here is a Tweet of Taleb equating border control with socialism, and presumably Trump’s wall with the Soviet Bloc. This is why the left leaves Taleb alone, because he’s steering his audience of predominantly centrist, libertarian, and right-wing readers to liberalism but his readers do not make the connection. Taleb has criticized nationalism in the past.

NY will soon learn that only way you can enforce socialism is by closing borders and keeping people trapped inside (Cuba, Soviet bloc). People vote with their feet: a mechanism by which organic systems enforce selection.

To quote Owen Benjamin, this is wizardry on Taleb’s part. Border control and socialism have nothing to do with each other; to oppose one does not mean you support the other. Many on the left, such as AOC, oppose borders and are socialist or have socialist inclinations.

This is why the left is dangerous, especially when they assume the likeness of their opposition to hide their true intentions.

Vox however would probably argue that just because the left is attacking someone, does not mean said person is on our/his side. The left attacking Ben Shapiro does not mean we have to ingratiate him. This leads to the debate over the role of moderates and centrists for the dissident-right. One can argue that these moderates are stepping stones on one’s path to ‘enlightenment’ by pointing neophytes in the correct general vicinity/direction; however, others would argue that a diluted message is as harmful, if not more so, as an overtly left-wing one, due to deeper, less obvious fundamental differences than just issue/object-level ones.