With the post-2009 bull market and economic expansion officially [1] the longest ever, everyone wants to know how long it will continue. Yet again I was right, in 2014–when the blog was launched–correctly predicting a continuation of the bull market and expansion, then only in its 5th year, and now its 9th. It’s amazing yet not surprising how a small blog run by one person manged to do what the majority ‘experts’ couldn’t. I attribute some of this to my understanding of HBD, which has proven to a useful weapon in my overall financial and economic analytical arsenal.

Today, interest has turned to the question of when the next recession will occur. The short answer is the same as always—no one can predict recessions. But I’d like to talk about the issue anyway, since everyone seems interested in the question.

I agree. Those who say they can are almost always wrong (look at the abysmal track record of Zero Hedge and overpriced gold-peddlers such as Peter Schiff). But to answer it anyway, I think a minimum of 10 years. I arrive at this by looking at the interest rate cycle. Right now interest rates, or more technically, the federal funds rate, are still at only 2%:

There is a slight but positive correlation between higher rates and recessions and bear markets. The reason is, high interest rates makes riskier assets such as stocks and junk bonds less attractive relative to cash, so people park cash instead of deploying it for investment and business activity. The upper-end of the cycle is 6%, although it got as high as 10% in the late 80’s. Because CPI is still so low, the this makes the fed even more reluctant to raise rates. So this means it may be easily another 6 years before rates get to 6%, and for that to happen the CPI would have to probably get to 5% or so. The long-term rates (>10 years) would be kept in check (at around 4%) by high demand for treasury bonds, creating a long-term inversion of the yield curve. Then it will spend another 3 or so years stabilizing. Then after that, it enters the pre-recession phase, which takes about two years, until the actual recession happens.

An extremely bullish scenario is when inflation exceeds the federal funds rate, which has been the case since 2009. So let’s say you have the CPI at 7% but the federal funds rate at 5%. This means that cash, although it pays a high nominal yield, is still lagging on a real basis, making riskier assets such as stocks more attractive. If this is reversed, then cash is more attractive, but often it’s the other way around. IF you have 1% CPI and the bank is paying 7%, then money in the bank is a very good deal. Given the common and justified complaint that the CPI (which excludes a lot of items) underestimates actual inflation, the actual inflation is probably closer to 5% vs. the 2% federal funds rate. Such a large difference (3%) is very bullish and another reason for there not to be a recession anytime soon. We’re nowhere near closing the gap, especially given fed chair Powell’s dovishness.

Consider the relationship between CPI, interest rates, and recessions, as shown below: 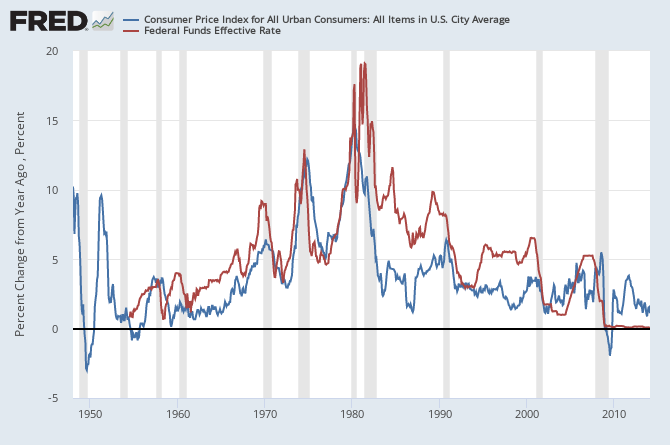 Just eye-balling it, a good strategy is to be ‘long’ cash when the gap between the federal funds rate and the CPI is ‘wide’ and long stocks when it is zero or negative. One switches from stocks to bonds when the gap widens to 2%. Such a strategy would have missed all bear markets, but would have lagged the S&P 500 somewhat in the late 90’s and the 80’s. But keep in mind that throughout the 80’s and 90’s, short-term bond yields were very high, so you were getting 7-15% a year with almost no risk.

As you can see from the following graph, the yield curve often inverts before a recession. Here it’s important not to over interpret the correlation, as US expansions never last more than 10 years, and yield curves typically don’t invert until well into an expansion, and the lag between inversion and recession varies somewhat over time. Furthermore, yield curves did not invert before recessions in the 1933-58 period. Still it’s one of our most reliable forecasting tools.

Inversion of the yield curve is an unreliable indicator, and an inverted yield curve does not imply recession (because there are two ways a yield curve can become inverted), as I discuss in further detail here:

[1] The economic expansion is technically only the second-longest ever (by only a year), but I think it’s safe to assume that record will be beaten.