With Tesla reporting yet another quarter of blow-out earnings (and a surprise profit of nearly $3/share), it looks like I was right yet again and the the left-wing (although in fairness, some on the ‘right’ are also not fans of Tesla) media’s attempt to defame Tesla and Elon Musk failed as always.

Tesla blew past analysts’ expectations for quarterly earnings and revenue while reporting its first profit in two years.

A month ago, victory for the anti-Tesla media seemed so close after Elon Musk was served a civil suit by the SEC for his infamous ‘funding secured’ tweet (just like the left was sure that Trump would be impeached when Manafort and Cohen were indicted), but such hopes rapidly evaporated into disappointment. Oh no, the left wrong again. HBD wins again.

So what about Tesla’s fundamentals.

Most people don’t understand how a balance sheet works or how Tesla’s business works. They see the headlines by the equally clueless and biased media of losses and assume “Tesla is losing a billion dollars a year…bankruptcy!” but ignore the fact that:

1. Tesla can raise tons of money very cheaply by selling bonds, and due to huge demand, can get a good rate.

2. As discussed in the post Why it does not matter that Tesla is losing money, when one removes one-time expenses such as factories, Tesla is very profitable and earns 20% profit margins on each car sold, 2x that of Ford and GM.

From the post Short-sellers wrong about Tesla, written on August 28th, in which I challenged a reader of Unz.com who is short Tesla (and probably hurting a lot right now):

As discussed in Why it does not matter that Tesla is losing money, Tesla is losing money on an EPS (earning per share) basis, but EPS does not make a distinction between one-time capital expenditures and operating income. Remove those expenses and suddenly Tesla is earning $1 billion a year in profits. Imagine two businesses: one that invests $1m into a factory or store and makes $300k a year. It loses $700k, which look bad, but after the factory is paid off, it’s making $300k profit every year. Consider a second business that earns $300k a year but spends $1 million every year on advertising in the hope of retaining customers. The second business is in a much less fortune situation because advertising is a recurring expensive whereas building a factory or a store is not. Tesla spends very little on advertising and gets free press from the constant media attention its cars attract, and also due to Elon Musk’s own celebrity status, and also Space-X and other projects that generate a ton of free PR. Ford and GM have to advertise constantly, but Tesla does not. But to those who want to bet against Tesla, by all means go ahead. In a few months or a year, you’ll learn the hard way what everyone else who has tried and failed learned: it does not work that way.

Sure enough, in quarter 3 of 2018, Tesla reported a massive $800 billion in free cash flow, which is close to the $1 billion figure cited in the passage above.

3. Tesla, unlike other auto brands, does not need to advertise, further boosting Tesla’s profitability. Elon Musk is a one-man PR company, and much more effective than multi-billion dollar ad firms. GM, Ford, and Nissan have to advertise incessantly just to make people aware their electric/hybrid cars exist, let alone want to buy them. The left-wing media wants Elon Musk to stop tweeting so that he is forced to buy ad space from the very media that is trashing him…how convenient.

4. Tesla is a status symbol, which means buyers will wait a long time for delivery (up to a year) and will pay a high sticker price (>$70k), and furthermore, such status, much like the iPhone, cannot be replicated by competitors who try to copy Tesla’s features.

5. As discussed here, Tesla is not dependent on subsides.

6. “Tesla cannot meet production targets!” Oh no, some buyers will have wait a few more months for their Tesla to be delivered. Big deal. The media has been using this argument for years and it has not mattered then and it does not matter now.

You have to understand how dumb the media is: they criticize Tesla for losing money and failing to meet production targets, but fail to realize or ignore the fact that Tesla is spending money on factories so they can meet those targets!

And here is nitwit David Einhorn, who on October 5th announced he is short Tesla, comparing it to Lehman Brothers. Whoops.

In an exchange with Lubos Motl, a theoretical physicist who is probably as smart as Ron Unz, I again refuted these same tired talking points: 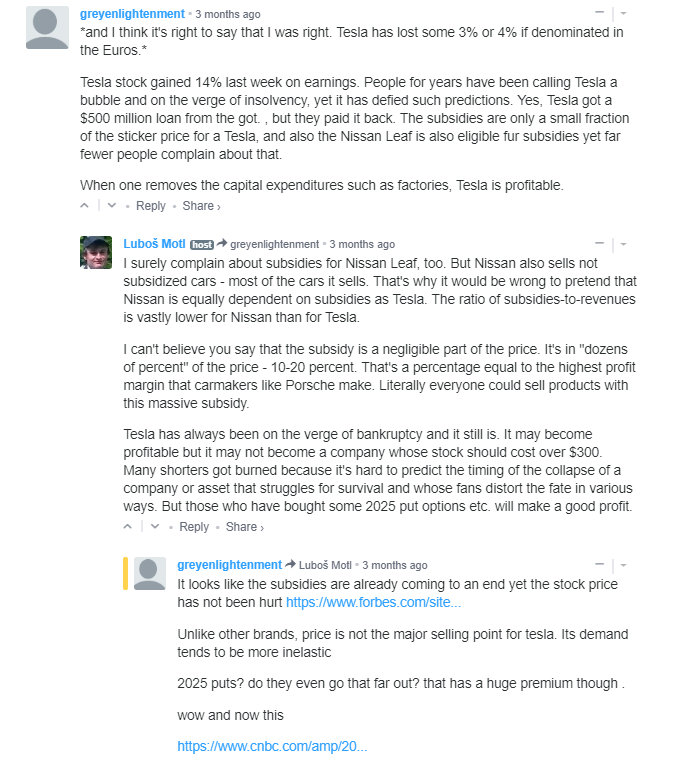 It does not matter how smart you are if your facts are wrong and you’re parroting the same wrong talking points by the low-IQ media. Many smart people in 2008-2009 predicted that the financial crisis would turn into a full-blown depression and that the economy and stock market would take decades, if ever, to recover, an example being Vox Day, who is a certifiably smart guy with an IQ of 150, who in 2009 wrote a book Return of the Great Depression predicting such an outcome. It didn’t return. All of the pieces for another Great Depression seemed to be in place (much like how Tesla losing a lot money should be predictive of insolvency), but as as the saying goes, the devil is in the details, and Vox and others underestimated the efficacy of fed policy, the resilience of the consumer, innovation, and the v-shaped rebound in profits, earnings, exports, and other stuff…And as another example, Moldbug, the pseudonym of a prolific blogger and child prodigy who got accepted at a young age too a prestigious computer science program, in 2013 predicted that the U.S. government would make Bitcoin illegal and that the price would collapse to zero. None of those things happened. The government bans crimes, not the mediums through which crimes are facilitated by. Murder and robbery are illegal, not guns. Child pornography is illegal, not the internet. But at the time it seemed conceivable that the U.S. government could ban Bitcoin, so it was not like his prediction was unreasonable or unfounded, but still wrong.

Everyone gets things wrong. But to minimize the likelihood of being wrong, you have to understand how the past relates to the present and understand the subtle details of how the past and present are different.

In conclusion, it’s amazing how quickly things can change with Tesla. Just a month ago the sky seemed to be falling, with constant negative press about the SEC, concerns over Elon Musk’s mental health, Tesla losing money, and so on. Had someone shorted Tesla just a week ago based on the media’s pessimism, they would be down 20%. Of course, Tesla could face problems, but this was a really solid earning report that dispels a lot of the gloom we have been seeing lately. That’s why we need to hold the media accountable for being wrong. The problem is, the media is insulated from the consequences its actions. Far more people have been hurt by heeding the media’s bad financial advice than Musk hurt with his tweet.